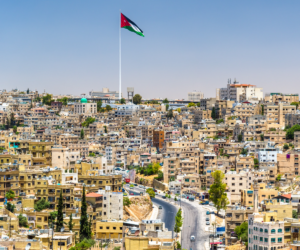 Despite the belief of some observers that Jordan’s is a rentier or semi-rentier economy, empirical data suggests that Jordan no longer fits either of the two definitions.

Since the 1950s, the trend has been very clear: in every crisis year, foreign aid to Jordan will spike, then subside to its “normal” levels, keeping the trend of systematic and linear decline.

Similar modest spikes took place in 2011, in response to regional protest movements, to 22 percent, and in 2014 to 17 percent as a result of war or terrorism in Syria and Iraq. In the 2022 budget, the percentage of external grants to domestic revenue was 10 percent.

This set of empirical evidence challenges the often-cited assertion that Jordan’s economy is rentier or semi-rentier.

The data presented here suggests that it is erroneous to call Jordan a rentier economy. Jordanians are funding 90 percent of the public budget.

Today, with the new economic vision 2033, we need to make sure that tax burden is equitably distributed, with an eye on fast and sustainable economic growth.

It is perplexing to see the economies of Saudi Arabia, Egypt, and Israel growing by substantial percentages while we are stagnating, our employment is on the rise and a majority of our youth is eager to leave the country.

A more assertive government action on facilitating and easing investment tracks for Jordanian capital is long overdue. It is about time we move beyond business as usual in these times of “compete or vanish”.

This article was originally published in Jordan News on August 28, 2022. For the original article source, click here.