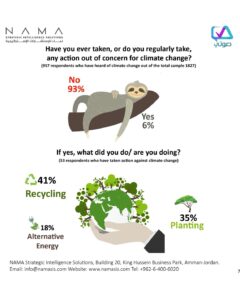 AMMAN — An overwhelming majority, at 87.6 percent, of Jordanians say they feel a change in the pattern of the weather, yet only 52 percent indicated their familiarity with the term “climate change”, according to a recent survey conducted on climate change by NAMA Strategic Intelligence Solutions.

The survey, gauging Jordanians’ knowledge, attitudes, and behavior in relation to climate change’s causes and effects on the Kingdom, was conducted on a random sample of 1,827 respondents from Jordan’s 12 governorates, interviewed face-to-face between February 17 and 27 of this year.

When asked about what they knew about climate change, 54 percent of those who were aware of climate change linked it to the change in weather and seasons, 20 percent associated it with global warming, pollution, and rising temperature levels, 10 percent pointed to less water and deforestation, and 7 percent referred to ozone depletion.

Further, 51 percent of Jordanians among those who have heard of climate change believe that it affects, or will affect, them personally. Of those, 56 percent reported that climate change may cause health issues while 12 percent referred to economic implications.

When it comes to causes, 46 percent of Jordanians who have heard of climate change stated that “air pollution” was the main contributor, compared to 19 percent who pointed to deforestation and 8 percent blamed consumerism, while 3 percent said that climate change occurs naturally.

The survey findings reveal a pessimistic attitude, especially that 58 percent of those who are aware of climate change believe that there is nothing to be done to combat this challenge. On the other hand, 28 percent argued that it could be tackled through reforestation, compared to 22 percent who referred to increasing regulations on factories to better consider the environment, 21 percent for using environmentally friendly products, 11 percent for raising awareness, and 7 percent for using electric cars and providing more public transportation options, while only 4 percent indicated switching to renewable energy can contribute to reducing the implications of climate change.

The survey also concluded that 64 percent of Jordanians who have heard about climate change receive their information from social media platforms, compared to 26 percent from television channels, and 7 percent from other sources, including radio stations and newspapers, among others.

When asked where they would prefer to get their climate change information from, 51 percent of those who said they were aware of climate change pointed to experts, 23 percent referred to environmental activists and organizations, and 18 percent indicated the government. It is worth noting that 57 percent of respondents with university education prefer to obtain information on climate change from subject matter experts.

The survey results also show that Jordanians are more concerned about the water crisis than climate change. In fact, 72 percent of Jordanians reported that they are “very concerned” or “somewhat concerned” about water scarcity in Jordan in the next 25 years.

This article was originally published in Jordan News on July 04, 2022. For the original article source, click here.