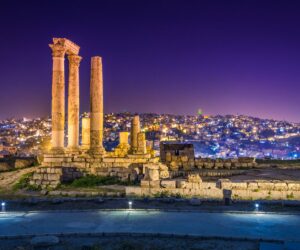 The poll, which was conducted at the end of 2019, covered Jordan’s foreign relations, the Arab-Israeli conflict, Iranian influence in the region and the military presence of various powers, according to a NAMA statement.

Concerning regional stability, 86.6 per cent of respondents said that the Middle East is unstable and insecure, NAMA CEO Jeries Ziadat said in the statement, adding that many Jordanians also blamed Israel for the regional instability (40.8 per cent), said it is the greatest threat to Jordan’s stability (52 per cent) and the greatest enemy of the Arab world (65.7 per cent).

When it came to the peace treaty between Jordan and Israel, 54.7 per cent of Jordanians indicated that they support cancelling it and returning to the “no war, no peace” state of affairs before the treaty was signed in 1994, Ziadat noted, adding that 41.3 per cent indicated the peace treaty should be upheld.

Regarding Jordanians’ opinions on which country can most effectively play the role of the honest broker between Israelis and Palestinians, Turkey ranked highest with 52.6 per cent, followed by Egypt at 26.3 per cent, according to Ziadat.

According to the poll, many Jordanians view Iran as a powerful influence in the region, with the majority of Jordanians saying that Iran has a “very large influence or some influence” in Iraq (85.6 per cent), Lebanon (80.9 per cent) and Syria (80.1 per cent), among others.

Regarding the Syrian crisis, 83.4 per cent of polled Jordanians indicated that Jordan “dealt with it well”. Over 80 per cent of respondents, however, said that refugees in the Kingdom, including Syrian, Libyan, Sudanese, Somali, Yemeni and Iraqi refugees, should go back to their countries or another country, according to Ziadat.

The second wave of the poll will be conducted during the first quarter of 2020 to account for changing politics and geo-politics in the Middle East, Ziadat said.

This article was originally published in The Jordan Times on January 26, 2020. For the original article source, click here.