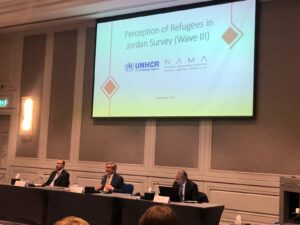 AMMAN — A majority of Jordanians, standing at 92 per cent, feel sympathetic towards refugees in Jordan, according to a newly released public opinion survey by UNHCR, the UN Refugee Agency, in partnership with NAMA Strategic Intelligence Solutions.

During a press conference in Amman on Wednesday, representatives from UNHCR, the Jordanian government and NAMA Strategic Intelligence Solutions released the findings of the survey covering Jordanians’ opinions on the Kingdom’s refugee population.

Key figures highlight that 76 per cent of Jordanians believe that the government’s approach towards refugees has been positive, echoing the results of surveys conducted in June 2021 and December 2020.

“But as refugees become increasingly intertwined in Jordanian society, we can no longer just consider their needs in isolation,” he added.

In the survey, around 64.3 per cent of respondents agreed that “Jordan should focus on helping Jordanians not refugees”.

There is a growing sense of dissatisfaction with a perceived inequality of support among Jordanian citizens, with 68 per cent of Jordanians believing that “refugees get more support”.

When looking at the effect of refugees on the Jordanian economy, more than three quarters of respondents indicated that jobs, wages and access to services have been negatively affected by refugees.

However, most Jordanians said that the pandemic had not changed their perception of refugees, although most believed that they had been more adversely affected compared with their refugee neighbours.

These statistics align with Bartsch’s comment that the slight increase in negative opinions of Jordanians regarding refugees’ economic impact did not indicate a “volatile movement in perception”, but rather a “fairly steady pathway”.

“Over the past three waves of this survey, we have seen a changing trend in Jordanian public opinion towards refugees that is associated with the worsening economic conditions of Jordanians,” said Fares Braizat, chairperson of NAMA Strategic Intelligence Solutions.

According to Mohammed Momani, former minister of state for media affairs and government spokesperson, these figures concerning refugees’ economic impact in Jordan are not overly surprising considering the Kingdom’s “25 per cent unemployment rate”.

“It is essential to help both the refugee population and the host community, and to increase communication between these two sectors,” he said during the conference.

Additionally, Momani expressed concern over the potential for “donor fatigue”, where international donors would begin to withdraw some of their funding. Continuous donor support coupled with better communication between host and refugee communities would provide the “recipe for stability”, which, in his statements, he referred to as the “name of the game” for current refugee support.

During the conference, representatives of the international community in Jordan re-emphasised their support to bolster efforts to support refugees and Jordanians alike and work towards the greater inclusion of refugees in national systems.

This article was originally published in The Jordan Times on January 26, 2022. For the original article source, click here.