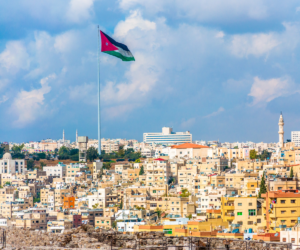 44 per cent of Jordanians believe Kingdom ‘heading in right direction’

AMMAN — A local survey on Jordanian perceptions of foreign relations revealed that 44 per cent of Jordanians believe the Kingdom is “heading in the right direction”.

Some 1,198 men and women responded, in August of this year, to the survey consisting of dozens of questions about Jordan’s relations with several countries in the region and some other strategic countries for the Kingdom.

The survey was prepared by NAMA Strategic Intelligence Solutions and the German organisation Konrad Adenauer Stiftung (KAS). The findings were released during a one-day event in Amman.

“The majority of those surveyed believe the Kingdom is going in the right direction because of the safety and stability of the country,” said NAMA Chairman Fares Braizat.

Meanwhile, those who indicated that “things were going in the wrong direction” listed economic hardship, poverty, price hikes and unemployment as reasons for their selection.

The aim of the survey, according to the organisers, is to provide a public opinion context for Jordanian foreign relations and policies and to ascertain Jordanian perceptions of allies, economic supporters and enemies of Jordan.

Other aims of the survey include identifying Jordanians’ preferences for potential allies and providing contextual public opinion data on evaluation of Jordan’s current political foreign relations and the pathway forward.

Around 70 per cent of respondents  would like to see a  “limiting” of political relations with Israel, Braizat stressed.

In response to a survey question regarding Jordan’s closest ally, Braizat said Saudi Arabia topped the responses, followed by the United States and the United Kingdom.

The respondents indicated that Jordan should cooperate more in the future with Turkey, Saudi Arabia and the United States.

Meanwhile, 74.1 per cent of respondents said that there should not be any military bases in Arab countries, according to Braizat.

Turning to the Palestinian-Israeli conflict, around 92 per cent of survey participants stated that they were “not satisfied at all” with the way the United States is currently handling the conflict, Braizat said.

“Much of this dissatisfaction can be attributed to the US’ decision to move its embassy to Jerusalem, a controversial decision that is vastly condemned by Jordanians,” Braizat explained.

Meanwhile, KAS Resident Representative in Jordan Annette Ranko said that Jordanian-German relations are growing stronger in many fields because the two countries share similar views and visions on quite a number of regional issues in the Middle East.

“Jordan is of strategic importance to many of its partners, including KAS, the think-tank of Germany’s ruling party,” Ranko said at the event.

This article was originally published in The Jordan Times on October 16, 2019. For the original article source, click here.