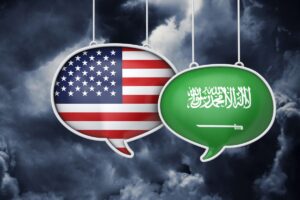 AMMAN — A Jordanian public opinion survey, carried out by NAMA Strategic Intelligence Solutionsin cooperation with Konrad Adenauer-Stiftung, expected to be published Sunday, found that the United States and Saudi Arabia are the two most important allies to Jordan in the eyes of Jordanians.

These surveys aim to compare changes within Jordanian public opinion towards Jordan’s foreign relations during the four years 2018–2021 and establish a reference point for measurements in the coming years.

The survey revealed that Jordanians interchangeably placed the US and Saudi Arabia as the first and second-largest economic supporters of Jordan and its closest allies, as indicated by three surveys (2018, 2019, and 2021).

The importance that Jordanian public opinion attributes to the relationship with the United States and Saudi Arabia is demonstrated by Jordanians’ description of Jordan’s political relations with the two countries.

The survey showed that more than two-thirds of Jordanians describe political relations with the US as “very good,” followed by Saudi Arabia and Egypt with 55 percent each, the UK with 54 percent, Turkey with 53 percent, Qatar 51 percent, and the UAE 50 percent.

The survey also showed that Saudi Arabia and Jordan share the most foreign policy interests at around 35 percent, followed by Egypt at 16 percent.

The United States ranked first among non-Arab countries with which Jordan shares foreign policy interests at 63 percent, followed by Turkey at 9 percent, and the UK at 8 percent.

Compared to the 2019 survey, the percentage of those who would prefer to “strengthen relations” increased between 15–6 percentage points (in descending order) with Egypt, Saudi Arabia, the United States, Qatar, Iraq, the UAE, Syria, and the UK.

Similarly, the percentage of those who would like to limit relations with Israel increased from 70 percent in 2019 to 74 percent in 2021.

This survey was conducted after a series of meetings and cooperation summits between Jordan, Egypt, and Iraq, between September 4–14, 2021, and 58 percent of Jordanians indicated that they knew about the cooperation between these three states.

The level of optimism among Jordanians regarding this cooperation amounted to around 60 percent, while 23 percent said that this cooperation would succeed in further integrating the three countries’ economies.

The survey showed that most Jordanians oppose peace treaties and agreements to normalize relations signed by Arab countries with Israel.
On average, 70 percent strongly opposed and 10 percent somewhat opposed peace agreements between Egypt, the PLO, and Jordan with Israel.

Almost the same percentage oppose the normalization agreements between the UAE, Bahrain, Morocco, and Sudan with Israel.

When asked about their position regarding Saudi Arabia signing a normalization agreement with Israel, the percentage of opposition was the highest; 73 percent strongly opposed and 11 percent somewhat opposed.

For the first time, support for the one-state solution is the highest among Jordanian public opinion at 31 percent, which nearly doubled from 16 percent in 2019.

This article was originally published in Jordan News on October 17, 2021. For the original article source, click here.