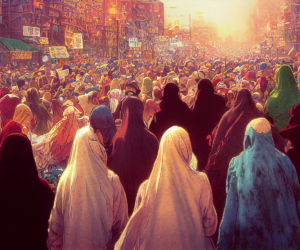 For the past five weeks, Iranian women and youth have been protesting against the regime, demanding freedom and intrinsic, fundamental change to the 43-year-old theocracy, in response to the death of Mahsa Amini following her arrest by the morality police.

Since then, over 12,000 protesters have been arrested and 250 killed, including 23 children, according to Amnesty International and the Human Rights Activists News Agency.

It is not the first time Iran has witnessed demonstrations, but the current wave feels different and has transcended limitations its predecessors dared not challenge. The Green Movement of 2009 demonstrated over election fraud. The 2017-2018 protests focused on economic policies, and the same happened in 2019-2020 when fuel prices quadrupled.

The current movement started with a clear slogan of “woman, life, freedom” before widening its demands with chants such as “death to the dictator” and “death to Khamenei” — a clear sign that Iranians can no longer tolerate the regime’s iron fist.

Whether the protest movement is viewed as an extension of those that occurred over the past few years or as a standalone wave, these chants are poetically reminiscent of those heard during the Islamic revolution in 1979 when Iranians chanted “death to the shah.”

Iranians then were disillusioned with the Western-backed autocracy, and are now disenchanted with the theocratic oppressive regime. The chants are the same; it is only the targets who are different.

In every protest movement, there are four important components to consider that could shape potential outcomes. First is the location where demonstrations take place. When protests are held near government buildings, it signifies a level of trust in state institutions and that salvation lies in their hands. When they take place across many cities, as is the case now, it demonstrates a clear rejection of the authorities and, more importantly, a sense of demographic unity, including marginalized minorities.

Second is the type of demands made. In the 2010s, the MENA region as a whole saw two major types of demands: those that pertain to the economy and those in relation to personal freedoms. Protests over economic policies have proven to be easier to suppress, whether through promises or oppressive responses. Those over personal freedoms, though, are much harder to shut down when citizens’ rights to dignity are in jeopardy.

Third is the level of support from groups and individuals who could potentially contribute to the success of demands. Two key groups stand out in opposition to the Iranian regime: Farashgard and the National Council of Resistance of Iran. While both retain different levels of support domestically, NCRI encompasses the People’s Mujahedin of Iran and its military power while Farashgard seeks to gain the backing of the US.

The extent to which these groups, or others, enjoy the protesters’ support is unknown. That is not to say that citizens are incapable of consolidating with like-minded groups who retain greater resources.

The fourth component is pushback from the incumbent regime. So far, we have seen the Iranian leadership employ violent and inhumane measures against all protesters, including women and children.

The Iranian regime is perhaps unlike any other in the region, as it is firmly coup-proof, aided by the Islamic Revolutionary Guard Corps, whose allegiance is wholeheartedly for Supreme Leader Ayatollah Ali Khamenei. With detentions, killings and other violent means, the regime is showing that it is not willing to budge. It is also seeking to blame the US and its allies.

For the second potential outcome, data from a World Values Survey from 2017-2022 suggest that 68 percent of Iranians support the women’s movement, two-thirds discuss political matters in public settings more than frequently, and only a third would never encourage others to take action regarding a political issue.

While common sense would suggest that the protest movement will never succeed unless it is armed, research shows otherwise. In fact, nonviolent protests have proven to be twice as likely to succeed compared with violent resistance, according to a study by US researchers Erica Chenoweth and Maria Stephen spanning movements between 1900 and 2006. Their research even showed that not a single nonviolent movement failed when it involved at least 3.5 percent of the population.

They emphasize that the inclusion of women and youth contribute a great deal to the success of movements, which falls in line with other research that suggests such inclusion lays the foundation for a successful democratic transition.

With that, continued protests involving nonviolent means and the engagement of wider segments of society can, at least nominally, succeed, and democracies have an obligation to aid those who have been risking their lives for freedom and dignity.

Should the protest movement miraculously succeed in overthrowing the Tehran regime, it will be critical to ensure that the right people are elected to rule, especially considering the nuclear capabilities Khamenei’s Iran has developed over the years, which must not fall into the hands of worse groups.

This article was originally published in Arab News on October 26, 2022. For the original article source, click here.