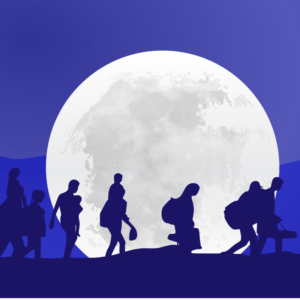 Perhaps the only positive in the midst of a grim Russian invasion of Ukraine has been the universal outpouring of support to the people of Ukraine. Neighboring countries opened their doors for refugees, who were treated with respect and dignity, which should ideally be the universal norm.

However, we cannot help but compare such positive treatment with the way Iraqi, Syrian and, more recently, Kurdish refugees and migrants, among others, were treated in Europe. They had to wait for weeks, as they endured terrible conditions in cold, underserviced refugee camps.

Granted, if we have to compare the Russian invasion of Ukraine and the suffering of the Ukrainian people with the adversities faced by people in this part of the world, then we must ensure that we do not belittle or overlook the suffering of anyone.

Yet this notion has been anything but universal. Western governments and media outlets proceeded with unmotivated double-standard coverage, with the cynical “uncivilized” comment of journalist Charlie D’Agata, for which he later rightly apologized, one of many examples.

At the same time, some Arab activists were inclined to give the benefit of the doubt. They repeated their message that they simply want the same treatment, the same attention, and the same favorable perception as that offered to the Ukrainians.

Even then, the optimists who rejoiced that perhaps we were at the brink of a paradigm shift in how the world views victims of conflict — regardless of their origin — were quickly brought back to reality. While social media conglomerates were actively encouraging users to speak up for the rights of Ukrainians, regardless of the messages, advocates of the Palestinian cause were being censored yet again, as seen over the past two weeks.

Therefore, unlike how they initially thought, Arab advocates were unable to bandwagon and ride the “globally woken” wave of activism brought about with the Russian invasion, to defend the causes they care about, chief among which is the Palestinian cause.

Let us dismiss the stark and blatant “us” and “them” debate. After all, we do not need Western media’s approval of our level of civility. The fact is that we, in the Arab world, have argued for peace and stood in solidarity with every human facing adversity, regardless of their origin; and that is the pinnacle of civilization.

We should, instead, proceed in a more practical manner. Here, Track II Diplomacy presents itself as a viable approach to bringing parity to government and media responses to victims of conflict. For this to be a success, three interrelated aspects must be present: Capacity, receptivity, and initiative.

Looking at the capacity component, there are two important stakeholders to discuss. First, there are thousands of Arab students and professionals who study, live, and work in the West, and they possess the networks and the capacity to influence public opinion.

Second — and perhaps more important — is the presence of influential Arab investors, whether independent or representatives of sovereign wealth funds, who control sizeable shares in some of the most important businesses in the world. They can, potentially, exert their politico-economic influence to shape Western public opinion in the direction of favorable policies toward our region, beyond business deals and treaties.

In terms of receptivity, a survey by the Anna Lindh Foundation in late 2020 suggested somewhat similar values between respondents from European countries and those from the Arab world, especially when it comes to how they view one another.

While this constitutes a favorable environment for positively shaping public opinion, the survey showed that interpersonal interactions were far more effective than media coverage at changing one’s views. In fact, 27 percent of European respondents indicated that meeting people from the Arab world changed their views positively, compared with only 8 percent for media content.

This leads to the initiative component. Students, professionals, and investors — immigrants and multigeneration nationals alike — have a major role to play, and even an unspoken moral duty, if we want to see proper parity in how the West views and treats Arab migrants, refugees, and victims of conflict.

They should cooperate with, or even form, nongovernment organizations and interest groups to gain public support, advocate equality in treatment, and hold decision makers accountable. They should leverage their networks — whether in their schools or communities — through conducting awareness campaigns, raising questions to their representatives, and even starting petitions to rally support, with the common message that victims of conflict must be treated with equal respect and integrity, regardless of where they are in the world.

The efforts led by youth activists online over the past year in speaking up for the rights of Palestinians resulted in Amnesty International calling on Israel to dismantle its apartheid system. It is possible that efforts by much more influential people, in areas where public opinion plays an integral role in shaping foreign policy, will lead to more consistent policies.

It is also likely that such efforts face denial and rejection, thus amplifying the current cognitive dissonance in the West. Should that be the case, then we would sadly and clearly be living in an era of “us” and “them”.

This article was originally published in Arab News on April 22, 2022. For the original article source, click here.