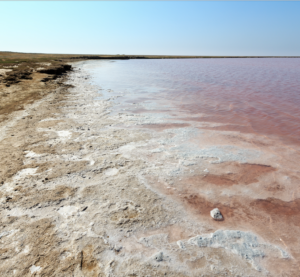 Tensions flared last week on the eve of this year’s World Environment Day, as Hezbollah’s deputy leader Naim Qassem proclaimed the group’s readiness to use force against Israel if the Lebanese government said Israel was violating Lebanon’s water rights. The Israeli Navy is also preparing for a possible Hezbollah attack in the disputed Karish gas field.

On the 50th anniversary of World Environment Day, there is no doubt that the MENA region is facing a worse environmental reality than ever. With a 1.5 degrees Celsius increase in temperatures since the 1950s, the prevalent challenges of malgovernance and socioeconomic inequalities are likely to be exacerbated by climate change.

Droughts and wildfires are two of the natural disasters that are slowly but unfortunately becoming a norm in the region, amplifying critical concerns over water and food security. The European Center for Development Policy Management believes North Africa in particular is expected to suffer more intensive and more widespread wildfires because of rising temperatures and longer droughts.

On the other side of the region, Iraqi pastoralists are forced to leave behind their traditions in search of a more sustainable livelihood. Severe droughts have affected near 18 percent of the Iraqi population, resulting in decreased water supply and quality and plummeting crop and livestock production.

Iraq’s western neighbor, Jordan, also faces a grim water security crisis. It has long been reliant on rainfall and groundwater, and the influx of Syrian refugees over the past decade has been depleting Jordan’s already fragile water infrastructure.

Nevertheless, Jordan’s agreement with Israel, brokered by the UAE — whereby Jordan will supply 200 megawatts of electricity to Israel for 200 million cubic meters of desalinated water every year — has not resonated well with Jordanians. The agreement has generally been presented as a breakthrough in Jordan’s water crisis, but has failed to chime with Jordanians’ interests, heavily influenced by their supranational pan-Arab and pro-Palestine identities.

It was a case of déjà vu for Jordanians, whose government signed a natural gas agreement with Israel a few years ago despite massive public scrutiny. They now see both their water and power bills becoming more expensive in spite of government assurances that both deals, separately, were in fact brokered to provide better quality services at lower rates.

Was Israel Jordan’s only choice in both cases? Perhaps it was, but probably it was not. Why would Jordan, then, risk public dissent, especially considering that Israel is known for extracting water from Palestinian territories, the Dead Sea, and the Jordan River?

Finances and geography might have played a massive role. But if prices were not going to decrease as is the case nowadays, then such agreements could have been better reached with Iraq, Egypt, and the Gulf states, and Jordanians would probably have been less dissatisfied with price increases.

Regardless of the second party involved, such agreements are anything but sustainable. These nearsighted agreements address only immediate need without much consideration for the future, as the resources are either scarce or depleting. In these circumstances, there are several measures to be taken immediately.

First and foremost, these agreements must be replaced with — or at least accompanied by — much more sustainable measures, including reusing, recycling, and desalination measures and infrastructuredevelopment to make use of every cubic meter of rainfall the region receives.

At the same time, both public and private sectors must move toward much more environmentally friendly production schemes. Governments should also provide incentives for businesses and households that utilize greener and renewable energy sources, as opposed to penalizing them with unnecessary levies.

Second, environmental public policymaking needs to be much more inclusive of young people, who tend to be more vigilant, concerned, and action-oriented when it comes to climate change. In a study this year, 91 percent of youth surveyed in 14 Arab states indicated that climate change was an important issue to them personally and 31 percent had taken or regularly took action out of concern for climate change — coupled with 50 percent who are becoming increasingly interested.

Third, as the world proceeds toward the post-coronavirus era, it is important that we learn the positive lessons of multilateral and cross-sectoral cooperation. For that to be a success, though, it is important to place all cards on the table and ensure that spoilers cease to inhibit mutual benefits, whether by extraction of scarce and depleting resources or by threatening use of violence.

Scarce resources can incite new conflicts and exacerbate current ones, with the involvement of state and nonstate actors alike. This can possibly go beyond competition over diminishing resources, and is more likely to center itself on strategic areas that can give the upper hand. Ultimately, we should certainly be concerned over continued destabilizing behavior in the Levantine Sea, which could slowly turn into the South China Sea.

This article was originally published in Arab News on June 10, 2022. For the original article source, click here.