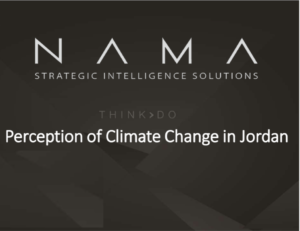 NAMA’s Polling Center “SAWTI” – NAMA Strategic Intelligence Solutions conducted a survey on climate change gauging Jordanians’ knowledge, attitudes, and behavior in relation to its causes and effects on the Kingdom. The survey was conducted on a multistage probability systematic random sample, which was drawn through a clustered stratified design of 1,827 respondents from Jordan’s 12 governorates, interviewed face-to-face between February 17-27, 2022.

You can view and download the survey in English and Arabic.